How to Write Lyrics When You’re Missing Inspiration 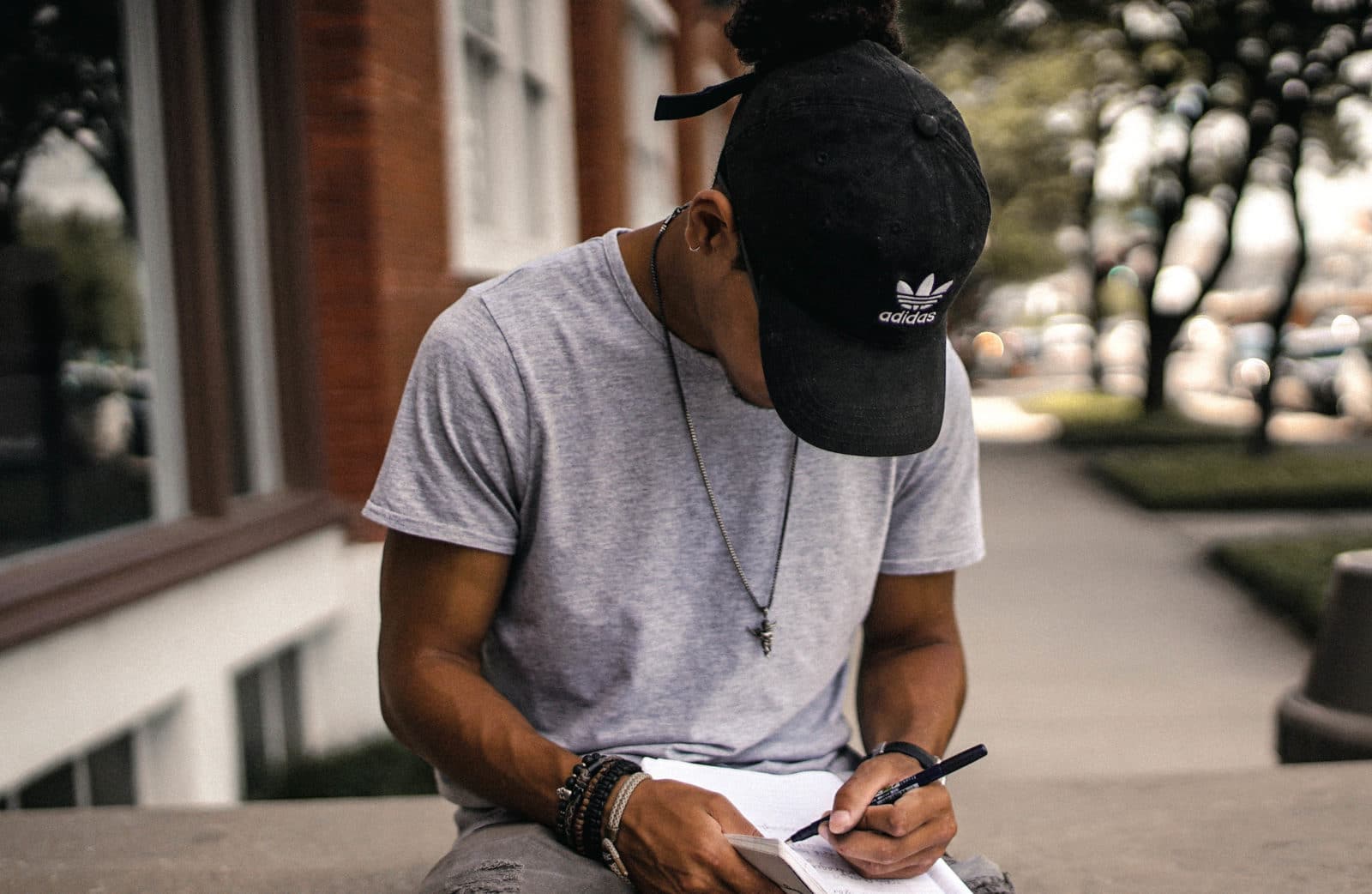 How to Write Lyrics When You’re Missing Inspiration

Writing raps and rhymes can be hard when you’re uninspired. Here’s how to write lyrics for your next hit and overcome that writer’s block.

You can have the best beats, the best rhymes, and the nicest flow. But eventually, that dreaded writer’s block is going to hit you.

It’s something that every rapper fears and yet it’s pretty much unavoidable.

You may think it makes you a bit lyricist, or that you’re not cut out for the industry. But before you beat yourself up, you should know that just about every single one of your favorite rappers experienced writer’s block at someone point or another.

The lyrics don’t always flow, after all, but that doesn’t mean you’re not a great rapper. It just means that you need to re-focus.

As Eminem once said, “Anything is possible as long as you keep working at it and don’t back down.”

Ready to learn how to write lyrics when you’re struggling? Then keep reading, here are some tips to get you past the block.

Figure Out How To Write Lyrics In Your Downtime

Most of us don’t learn how to write lyrics out of habit. We often tend to focus on the beats first, then let the lyrics flow as they may. This isn’t always the best course of action. In fact, it’s a pretty big mistake.

Even if you feel like the beats should dictate the bars, every song needs a strong lyrical foundation.

If you really want to learn how to write lyrics with a pro, you’ll need practice and lots of it. To succeed, you need to dedicate yourself to your writing.

Don’t just write to figure out how to write lyrics because it’s part of the game, write because it’s going to make you better. Every bad rhyme, every ineffective song, every overwrought cliche — each of these bring you closer to your apex.

Writing should become second nature to you before you hit the studio. If you want to make an impact, you’ll need to hone your skills.

Take those five minutes you just spent checking Facebook and use them to write next time. You’ll notice an improvement in no time.

Accept That Writer’s Block Is Part Of The Process

A lot of young rappers get a little too cocky when they learn how to write lyrics. They write page after page of lyrics with no end in sight.

But it isn’t always like that. Writer’s block is a fact of life, like death and taxes. The sooner you make peace with it, the sooner you can get on your way to becoming a great lyricist.

Fighting writer’s block is a lot like swimming against a strong current. Struggle as much as you’d like, but the tide is still going to take you under if you put up a fight.

So what’s the solution? The same as fighting the current: accept writer’s block. That doesn’t mean you have to like it, just that acceptance tends to make the process go by a lot quicker.

It isn’t a matter of ‘if’ but ‘when’. By accepting your writer’s block, you’ll help feel more at peace when the inevitable hits.

Don’t Put Pressure On Yourself

Writer’s block doesn’t mean that a writer is lazy or untalented. Just that the natural creative juices aren’t flowing.

You may feel tempted to pressure yourself into working through your block, but this isn’t always a great idea. You may end up writing and recording something that isn’t reflective of the rest of your work.

Most albums have a few songs that are dull and don’t seem like they fit. Chances are these are the songs that rappers felt they had to make.

They tried to push through their writer’s block and the result was…less than stellar, to say the least.

Try not to put too much pressure on yourself as an artist. If you don’t have any inspiration, don’t try and force it.

If you’re trying to make a name for yourself, one bad song is all it takes to tank a reputation. It’s much better to wait out the storm.

When a rapper really struggles to identify with his or herself as a songwriter, it’s usually a sign that they haven’t delved deep enough to really understand themselves.

What are the things you really care about? There’s no right or wrong answer here, but it’s something you’ll need to face.

Everyone has something they care about. It could be a social issue like poverty, police brutality, or politics. It could also be something a bit closer to home, like familial issues or mental illness.

Whatever you care about isn’t necessarily going to be unique to you — but your view on it will be.

Think about Childish Gambino’s career for a second. Gambino started out releases free mixtapes he recorded in his dorm room on his website.

Not only are they better than most of the other stuff on the market today, but they’re shockingly honest. Glover writes about issues like identity, how fame isn’t everything it’s chocked up to be, and about depression.

It’s deep stuff, but that’s why it stands out. In a time where other rappers were writing songs for commercials, Glover was creating something real.

Listen To Your Old, Unreleased Work

Not every piece is going to be release-ready. But instead of dragging those tired old tracks to your computer’s trash bin, take another listen. There’s almost always something in those old songs that can provide some inspiration.

All it takes to get most writers out of a rut is one source of inspiration. Who’s to say it can’t come from you?

You may be able to rehash some of the lyrics or use some of the themes or rhymes to create something brand new.

Of course, sometimes using your old tracks for inspiration still isn’t enough. You may just need to give yourself a break, shut off the computer, and focus on something else for a bit.

Everyone needs a break every now and again or else they’ll suffer from the dreaded creative burnout.

When you can’t seem to come up with any more lyrics, sometimes the best answer is to stop trying for a bit. You deserve a break.

A lot of us are too wrapped up in our own lives to get a sense of what’s going on in the world. Taking a break and learning more about your community can reignite those creative flames that have dwindled.

Talk to those who know how to write lyrics and you’ll discover a common link that you may not expect: reading.

What do you think? He seems to have a point. Reading opens our minds to new perspectives and ideas that can greatly influence our own writing.

Next time you’re trying to fill that notebook of lyrics, put down the pencil and pick up some reading material. It doesn’t matter what you read — a magazine, book, or even blog like this one.

Find some writing that you identify with and devour it. Set aside a few minutes each day to reading and watch your writing abilities soar.

As lyricists, we have a tendency to get stuck in our heads too often. A new perspective never hurts, so consider learning how to write lyrics for a new genre.

Now, before you discount this tip entirely, consider what Kid Cudi did when he was hard pressed for inspiration. He could’ve written Man on the Moon III, but instead, he wrote Speedin’ Bullet 2 Heaven.

Bullet was a pretty big departure for Cudi, as it was a rock album. While a lot of fans were left confused, Cudi reiterated that it was the music he wanted to make.

And ultimately, that’s one of the best things an artist can do: create for themselves. So if you’re looking for an excuse to write in a different style, here’s your chance.

If nothing else you’ll come away with a newfound appreciation for the musicianship of other genres.

As lyricists, we all have that nagging voice in the back of our heads. You know the one. The voice that tells us that whatever we’re writing isn’t good enough.

But then you release a song to tons of acclaim and praise. So what gives? More often than not, your internal editor isn’t always the voice of reason.

Knowing how to write lyrics is a lot like writing poetry. It doesn’t have to be in a specific style, you set the parameters. No one looks at a haiku and says it isn’t as good as limerick because of its style. Why should your lyrics be any different?

Want To Know How To Write Lyrics Like A Pro?

Now that you’ve read this article, you have the secrets needed to write lyrics through even the toughest bout of writer’s block. So next time writer’s block hits, hit back harder.

And if you’re looking for some great beats or instrumentals for your great new lyrics, get in touch. I’d love to discuss collaborating with you!

[…] to jazz. Big has one of the most imitated styles and is a legend due to the fact that he never wrote his raps […]

[…]   There’s a reason why N.W.A. was responsible for hip-hop hitting the mainstream. They pulled from funk and early hip-hop to make beats like this one, which was the perfect backdrop for the socially conscious lyrics. […]

12 Tips for Naming a Song

[…] Naming a song is just as important as writing the piece. […]

[…] we just said that simple is best but that doesn’t mean your word choice has to be basic and dull. After all, a strong hit song is one that brings people into it […]

Creating the Next Hit: 9 Songwriting Tips to Boost Your Music Career | Tellingbeatzz

[…] Writing great lyrics will put your audience into the story of the song and make your words come alive. By doing so, you’ll make the listener feel the same emotions you’ve felt. […]

i do rap but sometimes i reapeat one word

Turn Up! How to Promote Your Music Online

How to Create a Successful Music Marketing Campaign